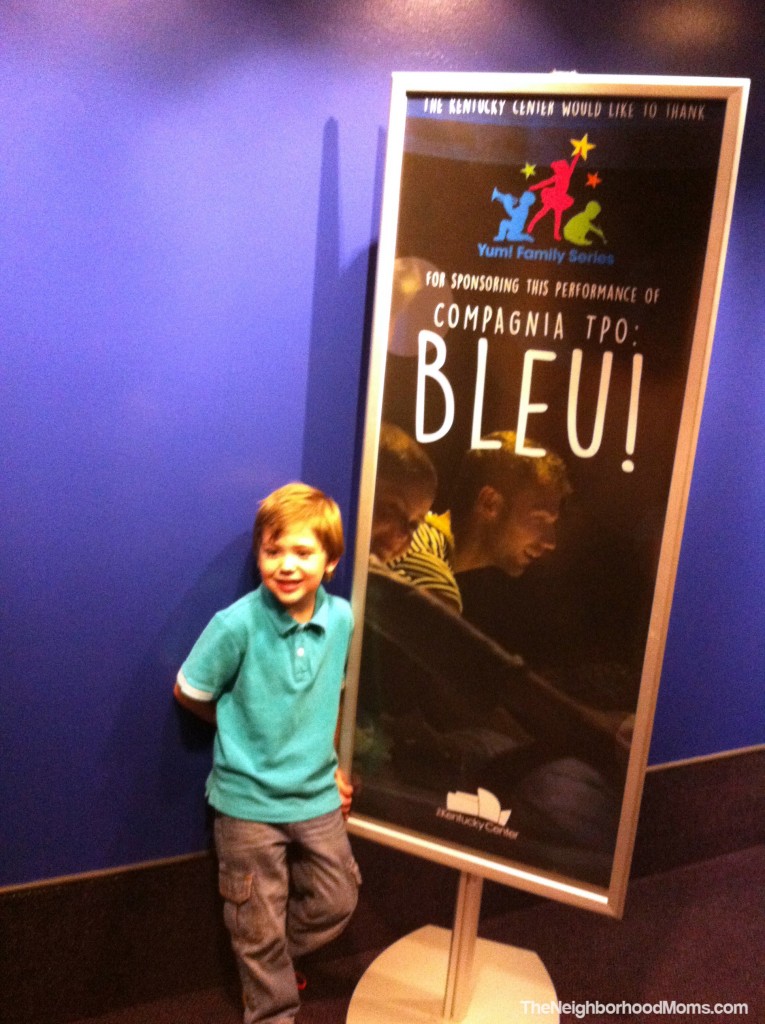 Tonight, the boys and I got to preview BLEU! from Compagnia TPO, an Italian theatre group that specializes in “interactive theatre in immersive environments”.  I have to admit, I was excited to learn about the show having dance and music in a format that sparks children’s interest and creativity, but I was anxious that my children would not actually be able to sit all the way through it.  Especially with tonight’s performance beginning an hour after their usual bedtime!

BLEU! was a theatre experience like none other I’ve ever seen, and my boys absolutely LOVED it.  I highly, highly recommend going, if you can.  There is even a sensory-friendly showing planned for Saturday, May 23 at 11:00, if you need a less-crowded theatre for your child to be comfortable. It is absolutely worth spending an hour lost in a bit of whimsy, magic, and adventure.

Just before we entered the intimate MeX theatre at Kentucky Center for the Arts, we were lined up and an usher explained that we would be walking into a small theatre with blue lights and would be able to hear music and sounds that would remind us of the ocean. We were also told to go ahead and put our shoes under our chairs, as children and their adults might be selected to join the performers on stage throughout the show. 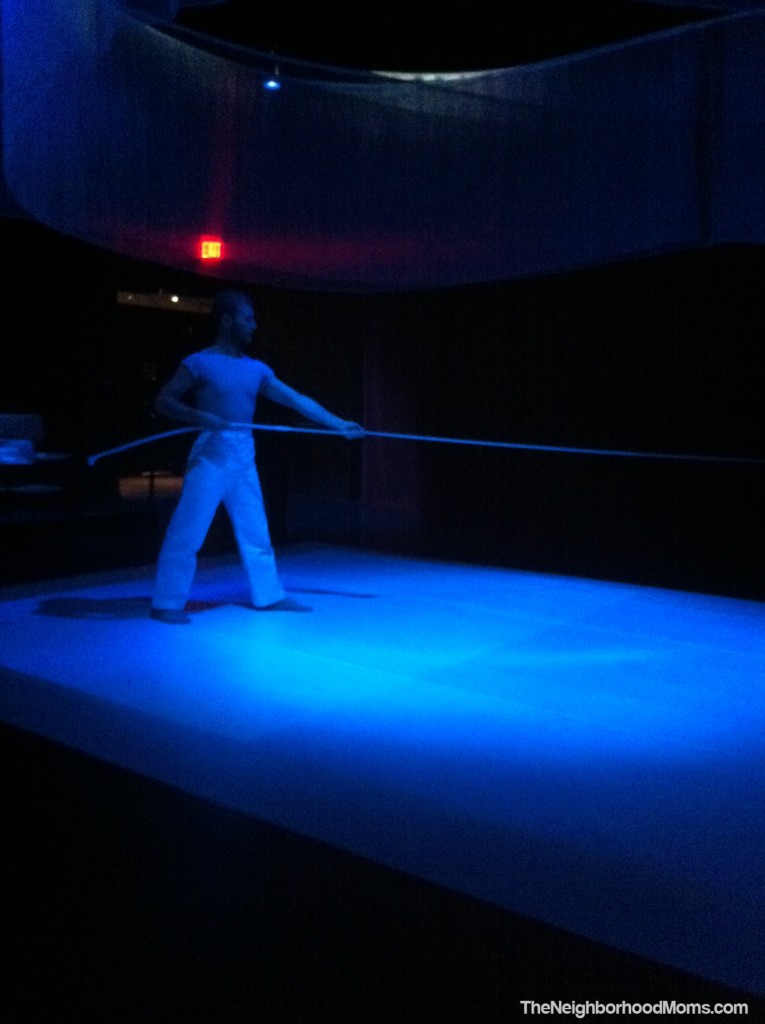 My boys got a tad bit restless waiting for the actual show to start, though they were fascinated by the man holding a rope, perfectly still, the whole time we waited.  They also admired a woman lying on a sparkly rock in the corner off to the side.  So still were the two that Ian decided they weren’t real people, which should give you some idea about my sweet boy’s activity levels.  Once the show began, both of my boys were immediately enthralled with the Sea Nymph’s magic pearl ball and sat very still while watching her dance. 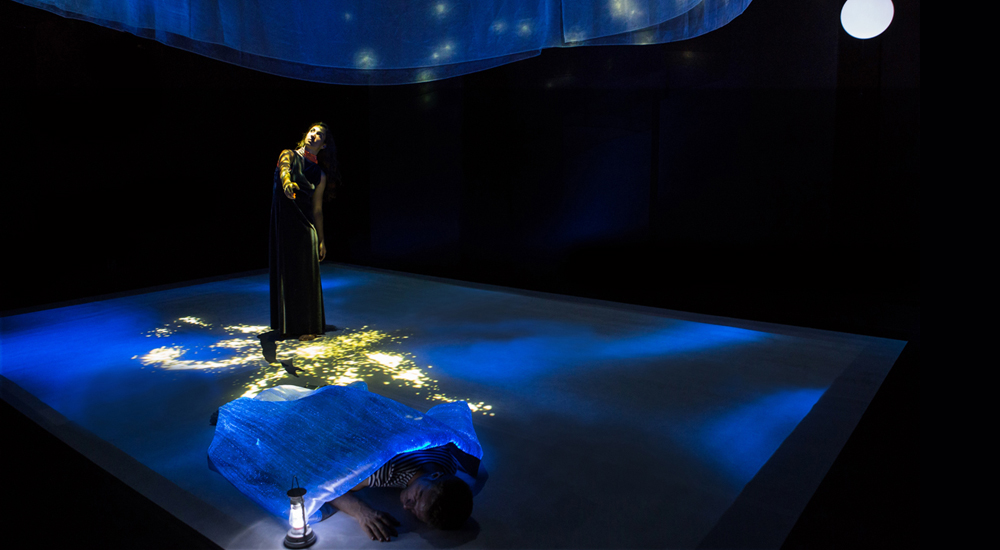 The storyline follows the interactions between the sea nymph and a sailor, who is lead to explore and discover various levels and aspects of the Mediterranean Sea. For instance, she leaves shells for him to find on the beach, and his interactions with those shells cause music to play when they are placed in the right lighted spots. 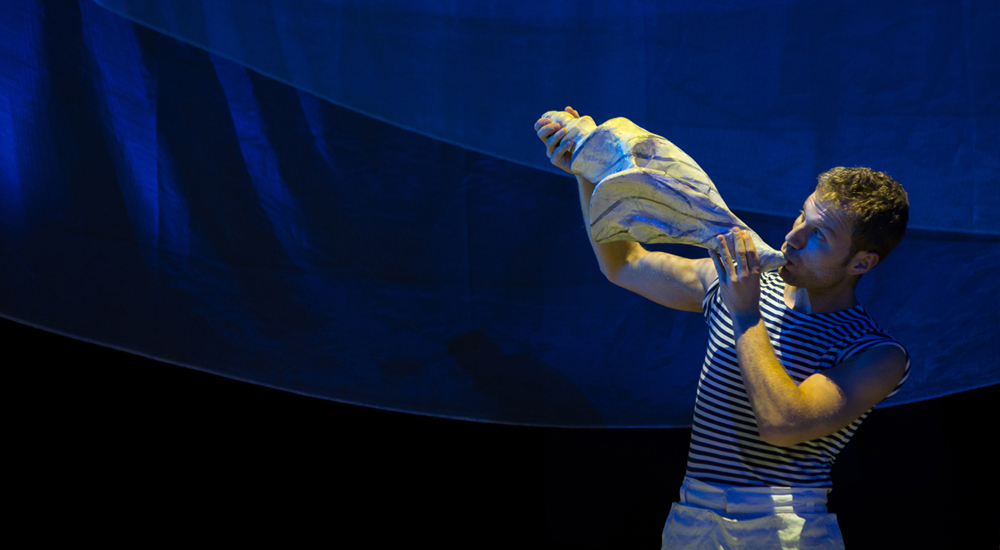 The stage space is conceived of as a dynamic and reactive environment that can involve the public in individual or group actions: in fact it is set up with sensors (videocameras and microphones) that allow both the performer and the public to modulate sounds or interact with images through movement or voice.  These technologies allow the creation of ‘sensitive’ theatrical environments where children can explore the stage space, discovering that it responds to their actions in a certain way. 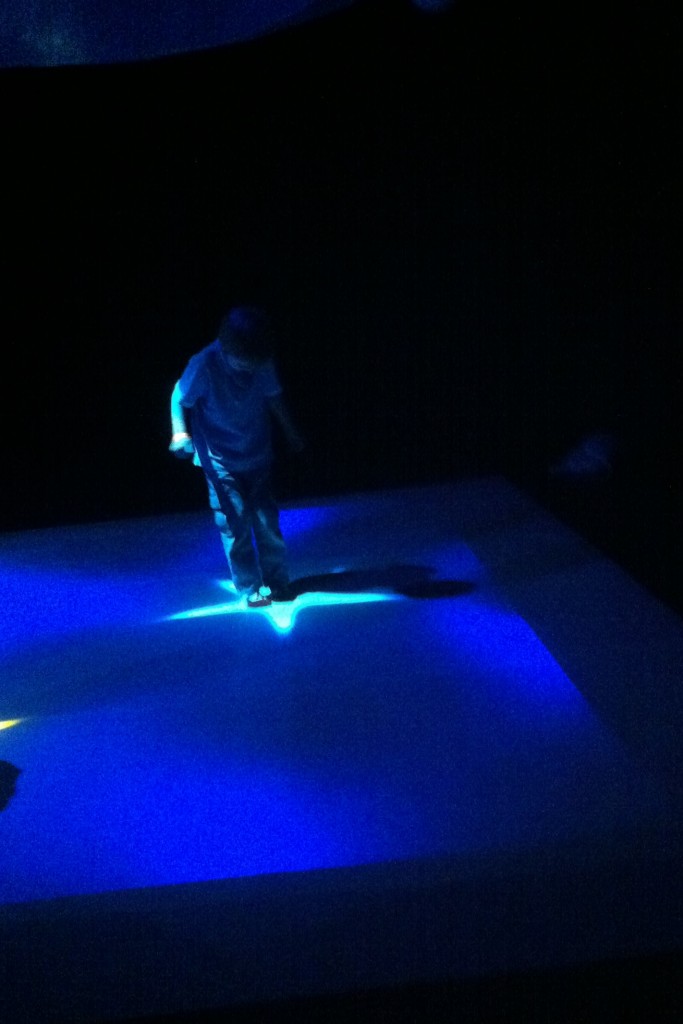 The actors said little, with just a few small directions here and there to help guide the children of the audience in their own opportunities to explore the stage and how their actions cause lights or sounds to start, stop, or change. Children were (wordlessly) invited to help explore and help solve problems throughout the Sailor’s adventures to the deepest abyss and back up again, much to their delight.  Ian was stunned when the show was over.  He actually said, “That was too short!” 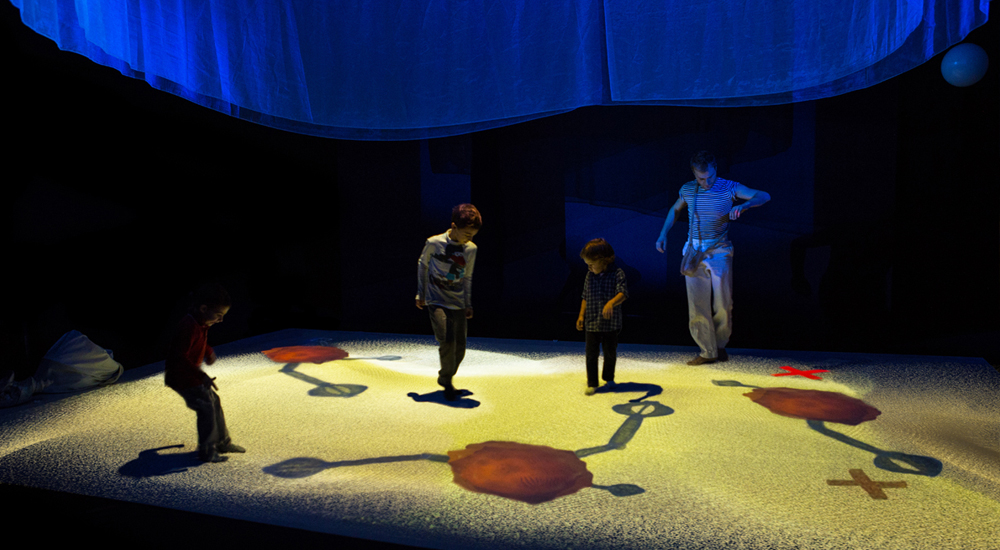 We did learn a bit about the sea and were inspired by the imagery and the sailor’s adventures with the Sea Nymph to want to get out our ocean and seas books and learn even more.  At one point, for instance, the sea was dirty, and some of the children in the audience were invited to help clean the floor and make the water clear again. With this show still fresh in our minds, we will be able to talk about pollution and how we can help keep our oceans clean and healthy, as my guys play-act and we read more in the coming weeks.

My two year old loved it every bit as much as my four year old.  While Bleu! is appropriate for all ages, they recommend it for ages 4 and up, so know thy child, I suppose, as you decide whether to take your younger children. I think many 2 year olds would get a kick out of it. 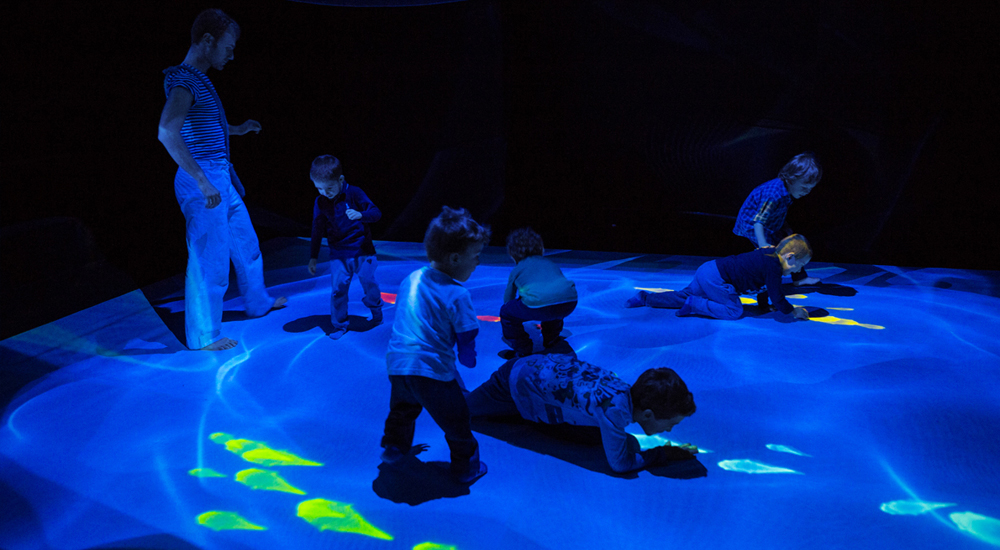 When asked their favorite parts, Ian (4) said, “being on the stage! and avoiding the ‘robot crabs’!” Isaac (2) said he liked running around with the schools of fish.

Because this is an interactive show that involves possibly being invited to the stage to engage in crawling, rolling, and dancing around the special stage floor, I HIGHLY recommend that you dress yourself and your children to be able to move around freely. As I was helping my 2 year old crawl around to make music with seashells, I kinda wished I’d opted for pants over my long skirt!

Frankly, I need to say that this is one of my favorite children’s performances we have ever attended.  If you are interested in attending, Compagnia TPO will be performing at the Kentucky Center for the Arts May 21 through May 23; times vary. Tickets are $18 and can be purchased here.

Mindy
Mindy is a homeschooling mom to two active boys and wife to a computer geek. Reading is such a passion, she dreams of lounging in library like the one from My Fair Lady. Since that is not likely to happen, she shares her love of books with her children.As much as she would like to be a kitchen goddess, cooking means dishes and washing dishes is a thorn in her side; frankly, you will probably never see a recipe post from her, unless it involves making play dough.When not busy homeschooling and playing with her two boys, ages 1 and 4, Mindy spends time browsing Pinterest for new DIY ideas, books to read, organization tips kids' activities, and sewing projects.
Latest posts by Mindy (see all)

Mindy is a homeschooling mom to two active boys and wife to a computer geek. Reading is such a passion, she dreams of lounging in library like the one from My Fair Lady. Since that is not likely to happen, she shares her love of books with her children. As much as she would like to be a kitchen goddess, cooking means dishes and washing dishes is a thorn in her side; frankly, you will probably never see a recipe post from her, unless it involves making play dough. When not busy homeschooling and playing with her two boys, ages 1 and 4, Mindy spends time browsing Pinterest for new DIY ideas, books to read, organization tips kids' activities, and sewing projects.