We received tickets to Pittsburgh area attractions from Visit Pittsburgh in exchange for this review.  Opinions expressed are 100% my own!

There are 4 floors of interactive exhibits that are very fun!  The Carnegie Science Center also houses a planetarium with shows every hour, as well as the Omnimax theater, and several live science shows!  The first floor has a new exhibit called Blue!  Imagine a large area with lifesize building blocks and… they’re all blue!  The theory is when you take away the choice of color, more imagination goes into the actual building process.  With some of the structures I saw the kids building, it looked like it was working! 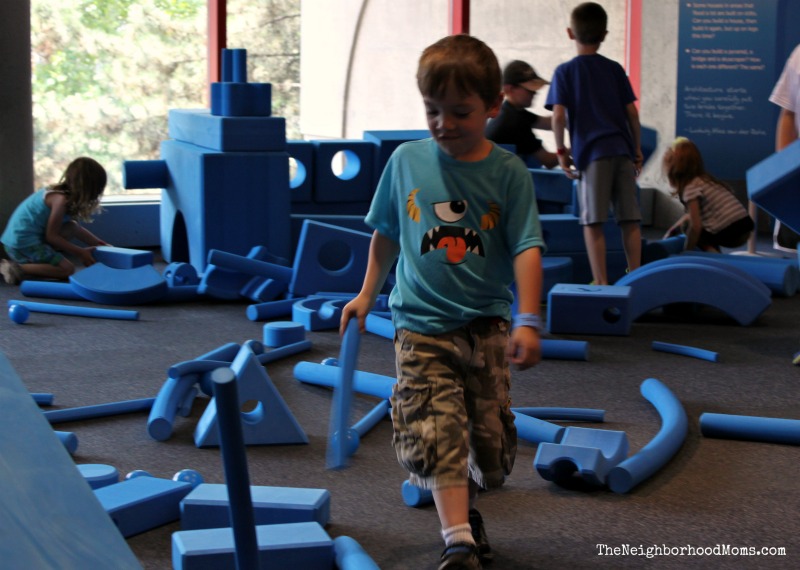 The Blue! area is large enough that when it’s a bit busy, like it was when we visited, there is still plenty of room for the kids to not trample each other and have plenty of room to make their own buildings.  Which is great if your kiddo is a bit possessive like mine (sigh.)

We also saw what it was like to be an astronaut in space aboard the International Space Station, how they sleep, and even how they ahem..potty!  The kiddo thought this was plain weird and refused to sit on the potty for a photo op. (boo!) 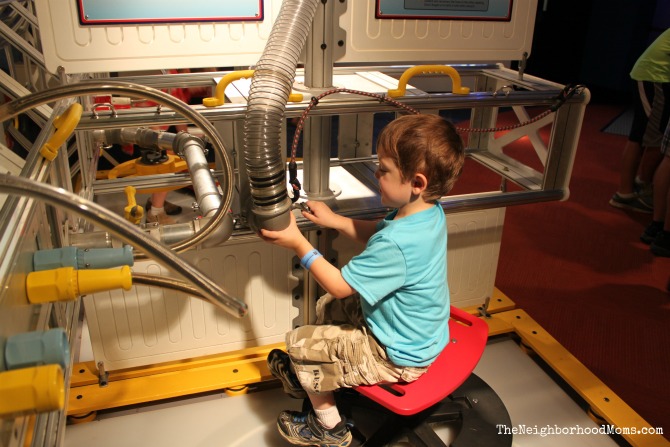 On the second floor is Roboworld and probably the largest miniature train display I have ever seen!  Roboworld has several exhibits showing how robots work.  Even a huge robot shooting a perfect basketball shot!  The miniature train room houses a very large display with several trains and little towns and so many cute things to discover!  Every little train enthusiast will get a kick out of this display! 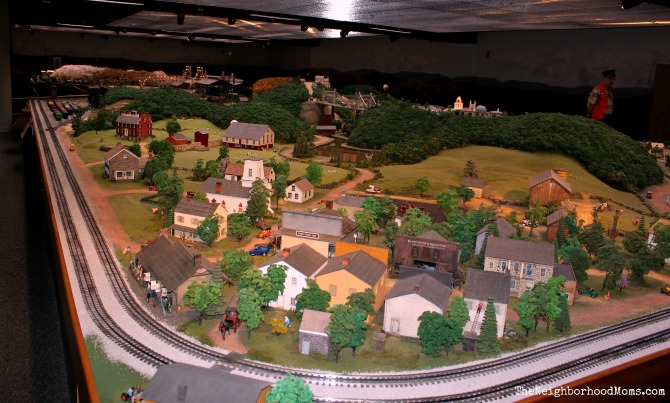 The third floor had a good size saltwater aquarium and a Google Earth station, but that was about it.  There is a new Body Scape exhibit under construction that opens July 3rd.  That sounds interesting!

The fourth floor houses the Exploration Station, Exploration Station Jr, and the Works Theater.  This floor has a ton of hands on exhibits!  Here you can try to build a log house on top of an earthquake machine, or learn how to build a bridge.  My son’s favorite station was the electrical circuits.  Learn how a circuit works and try to connect the pieces to make a buzzer buzz and lights light up!  He spent over an hour here playing with different combinations.  Hello future engineer!

Exploration Station Jr is an enclosed science play area for the 3-6 crowd with a water table, ball machine and more!  The Works Theater has live science shows every hour.  We saw the Freeze! show which was all about the different states of matter (Gas, Liquid, Solid) and lots of play with liquid nitrogen, fun!

There is also a SportsWorks building outside included with admission where you can learn about the physics of spots, life sports, and a sports challenge!

Docked just outside the science center is the USS Requin Submarine.  You can board the submarine included in your admission!

Our last stop was a show at the Buhl planetarium in the science center.  It was a fun show explaining about different constellations and planets that we can see right now in the sky!  The kiddo loved it!  Planetarium shows are also included in your admission, so take advantage and see a few while you visit.

The food in the cafe was mediocre, but we ate fairly late so it didn’t seem like there was much fresh off the grill food available.  You are allowed to bring your own food though!

Overall the science center is very fun for all ages.  I saw a lot of kids just running from station to station mashing some buttons and moving on.  It can be a very good learning experience if you take the time out with your child and explain to them what is going on.

Michelle
Michelle is the mom of a very active 9 year old boy. She recently left the workforce to be a SAHM and is learning to cut back to make it work. In addition to this busy life, she loves to do computer geekery with websites, graphics, and video games, as well as reading and cooking!
Email Michelle at michelle@theneighborhoodmoms.com

Latest posts by Michelle (see all)

Michelle is the mom of a very active 9 year old boy. She recently left the workforce to be a SAHM and is learning to cut back to make it work. In addition to this busy life, she loves to do computer geekery with websites, graphics, and video games, as well as reading and cooking!
Email Michelle at michelle@theneighborhoodmoms.com